The way someone else does it

And I don’t mean me, dear reader. I mean the big names who have shared their process with the general audience, or any writer you admire, or anyone else, really. The urge to emulate is so strong that it took me years to get out of the labyrithine trap that is trying what works for other people instead of trying to figure out what will work for me.

Sure, sometimes you just have to find plotting and/or drafting ideas elsewhere. When you’re plotting a first novel, or a third (I was very slow), it’s hard to get it right from the get go. Thus, it is almost impossible to avoid other writers’ examples altogether.

But I strongly believe that each of our minds work differently, and that writing is personal enough even before we get to plotting longer works. Find inspiration online, sure, but never trust another writer’s process, word by word, over your own.

With too much math

Oooooooh. This one hurts, but it needs to be said – most of the time, you can’t calculate your way into or out of a novel. Pacing is almost as important as, say, characters, but the moment you start following your wordcount plans around like a lovesick puppy, you can say dovidjenja to your novel. It is really nice to wish to be at a certain plot point at a certain section of a novel.

But it is also nice to have a lifetime supply of chocolate and/or Tom Hardy movies on hand, and as plausible.

With too little conflict

Among the things which actually are set in stone, even in my vocabulary, the importance of good quality conflict, ladies, gents and enbies, ranks among the top three spots. Hooking readers into the novel early on is all good and well, but unless there are enough clashes during the rest of the novel, I’ll be the first one to leave.

Because I prefer my novels, as well as the novels I read, to have a healthy amount of both internal and external conflict. The first novel I’ve published had a vague, blink-and-you-miss-it point of external conflict for my characters, and… I guess I’ll live with it. But it’s one of the major reasons I’m busting my ass off to include as much conflict as I can personally juggle as a writer in my more recent ones.

Well, this is a suggestion you can break, since, you know, life. But planning, writing outlines or character sketches or what have you, general dreaming, is a dish best served relaxed. Most people can definitely write or plan under pressure, but my brain, e. g., doesn’t work all that well when I’m stressed and, more importantly, just doesn’t think of as many plot points and fun stuff when I’m really tired. Plotting is where you want to be at your top game.

On that note, I can’t wait to get back into Johnny’s Girls sequel—that is my happy place.

Disregarding your genre requirements and/or standards

Planning too many plot points for your average genre length, or too little. Creating wrong characters. Or going for pacing—a thing you can plan and hope for, but can’t really see until the initial draft is done—which is simply wrong for your target audience. It takes time, and practice. And it’s not a bad thing. All of us are rulebreakers in our lives in more ways than I can probably count here. But the old adage stands—in order to break a rule, you need to first know it.

May those guilty of doing this, and doing this often, raise their hands… (*does so*)

It is a sad truth, generally known, that writers who are just starting to plot novels, especially younger ones (writers, not novels), more often than not take on more than we can chew. It’s how we learn. It’s how we grow. It’s how we reach for more, and how we achieve said more!

The only thing we need to remember is not to sweat it too much when the novel, more often than not, fails do deliver. And, even more importantly, to keep writing—not always that same novel, mind you—and learning.

The way you would’ve done five years ago

Or eight years ago, when I outlined and wrote my first novel to get published. I’ve written a bit more about the changes in the process here, but, long story short—don’t sell yourself short.

Writers are always learning, which is one of the reasons I’ve chosen to include this section even though it’s probably a lot different for people with 10 or 20 or more books out.

Even if this is the first novel you’ve planned (outlined, imagined, whatever) in a while, why not try a new, sexy approach? If I’d stayed with all of the rigid outlines I’d started with, I never would’ve gotten to this point.

If you never try something new, well then… I guess you’ll never know, right?

Photo by Amador Loureiro on Unsplash. 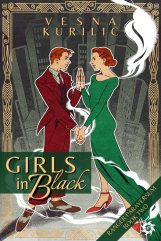 Until my next book: Girls in BlackApril 2, 2021
Girls in Black are now available everywhere! Yay!
<span>%d</span> bloggers like this: