Last weekend’s mystery trip I planned for my co-alpha went better than expected, although there have been some unpredicted consequences. I’ll list them here, just as a short sketch and as a reminder of things to focus on for next year. In total, I’d say it was a huge success, but it might have gone better altogether. The co-alpha was pleasantly unaware of my evil plans until the moment of departure, when I realized that she had been there previously, after all. In the end it didn’t matter – things we saw were completely new to both of us. We really had an awesome time – although the camera failed to agree with us. We’re definitely taking a stronger one next time.

Never rely on the forecast for your Mystery Trip – except when you plan on staying outdoor (or in the wilderness) all day long. The forecast for both Rijeka and Trieste (they’re quite close in the grand geographical scheme of things) was heavy rain. In the end, Rijeka almost drowned, while we barely managed to get our feet wet once during the whole day in Trieste. We also got sun to shine down on us at one moment! The whole trip had an autumny feel to it, but we enjoyed it – for some of the reasons listed in #4.

When traveling to a country with different currency than your own, take a lot more than you think you’ll need. Buying no souvenirs on an international trip is new to me and I’m really beginning to like it, but the moment when we left almost 80 kuna at the exchange office due to their enormous fees… well, I really wish to never again do such a stupidity. It was poor planning from my side, unfortunately – but in the end it worked out for us (see #3).

Being close to Rijeka, Trieste was bound to have at least of couple of people I know, and one of them was a cousin of mine who has been living and working there for the better part of the past three years. Still, I was reluctant to contact her, since I wasn’t even sure she was there for the weekend. In the end the universe conspired in such a manner that, since we didn’t have enough money to visit the second castle on my mystery list, the co-alpha and I finished the first part of the Medieval Itinerary just in time to run into – my cousin!

She came along just in time to take us to a perfect local students’ café, where we basically made up for the previous twenty something years of never having coffee together. It doesn’t sound as a big deal, but when she ran into us, the co-alpha and I were basically falling off our feet and were definitely ready to spend a quiet hour or so in a warm coffee place. With my cousin, it evolved into an awesome two hours while the three of us kept talking and talking and talking and in the end we felt our batteries were recharged even more than after a couple of hours of sleep. It pays off to be related to awesome people – and it pays even more to let yourself be surprised on a mystery trip. 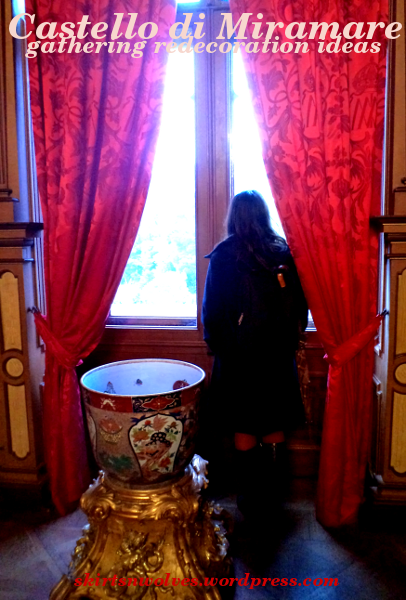 When I started telling my friends and colleagues – and almost everyone knew, at some point – that I’m taking the co-alpha to Trieste as part of our mystery trip, they were… well, they basically had the same confused frown I would’ve had if someone approached me with such a weird notion. Tourism in Trieste? Are you serious? What the hell are you going to see? And then I’d list all the awesome things I’d found in Trieste recently and they became just a bit less confused.

In the end, Trieste turned out to be one of the prettiest places I’ve ever seen as a tourist. But part of it was thanks to the city not being a tourist destination. It was middle of winter, on a cold and cloudy day, true – which made us feel like we were the only people in the world sometimes, especially in the wonderful Park of Miramare. But there was also the feeling of discovering things on your own which is all too often lacking in the bigger tourist cities. It’s really worth the adventure. Most of it was thanks to the itineraries (in Italian), but most of all due to the wonderful Medieval Itinerary (pdf in English), available for free online. It’s not something you get when visiting a bigger place – and it’s totally awesome.

We went on a trip day after the Museum Night, when we wore our steampunk outfits all over Rijeka. We slept for 4-5 hours (closer to 4, if I recall correctly). And while it wasn’t raining the whole day long, it did rain enough for me to get my feet wet. I spent the whole Sunday in bed with high fever, and the rest of the week (until today, yup) on sick leave. The co-alpha got sick a couple days later than me, but is currently, too, on sick leave. And I can’t help but think – what if we didn’t go? What if I kept the trip for a warmer day? Would we have stayed healthy? I honestly can’t tell. But sometimes getting exhausted two days in a row really costs more than you think.

And you know what? It was still totally worth it. And we even have some things from my mystery list left for a second trip to Trieste. Awesome for such an inconspicuous town.