Having finally accepted that I’m what you could call a published author, here are a few things I’ve learned over the past year of running around the country with a few brand new books and one ukulele.

#1 It’s all about the team. Even though I’m writing about werewolves, and lone wolves are something of a genre staple, the past few years have made me realize there aren’t really that many accomplishments in writing that you can achieve all by your lonesome – and having enjoyable book signings definitely counts as an accomplishment, an not a small one. My editor, my partner and my publisher (all different people!) went to great lengths to not only get the book out there, but to make sure all of us have fun at the signings. Because, I’ve actually been doing this whole “talking in front of a crowd” thing for over two decades – and nothing is as scary as talking about your book in front of complete strangers. Luckily, I’ve never been alone in this literary stuff – I’ve even had friends travel from distant places to attend signings! – and for that, I am truly grateful.

#2 People will care what you have to say – and it can get kinda scary! (That word again!) In a month’s time, I’ll be a guest author at one of our Library’s reading groups – a privilege, and an honor, I wouldn’t have dreamed of before we got the book out there. And, fun fact – the invitation arrived after the group’s moderator attended our first solo book signing, at Rijeka’s sci-fi-and-f convention Rikon. Sure, not many people ask questions during the presentations themselves – that’s what my editor and presenter is there for ❤ – but I’ve been completely amazed at the audience’s attention and support altogether. Even though not many of them actually get to read the book, at least they enjoy the story – both the plot and the way the book managed to get published – and it makes for fun events for me as the author.

#3 The cosplay thing goes both ways. When I started this whole “a wild author appears in front of the crowd” thing, I was accidentaly in costume. The next few times, it was deliberate – because it makes for better photos than just plain ol’ me. But, the sixth time I’ve done it, the outfit was so discreet – in front of an audience so full of Muggles that we didn’t even manage to get to the cosplay thing – that I’ve had to finally face the facts: I’m doing it for myself, sometimes just as much as for the photos and the audience, and sometimes – like that time – even more so. People who’ve known me for a while – and people who’ve seen me play host to other authors’ events – tend to be quite surprised at how anxious I get right before I have to go out there to represent my novel – but, when I have my editor and my cosplay to draw courage from and to anchor myself under the stares, it gets at least a little bit easier. (Talk about being a geek author, ha.)

#4 Be prepared to surprise your audience. It comes partly from having an editor well versed in PR – a person I’ve learned quite a bit from, in the years after our first NaNoWriMo rollercoaster in Croatia, 2012 – and partly from working in a library, but over the past couple of months we’ve managed to not only talk cosplay, Teen Wolf and obscure local history at our signings – but also play Bad Moon Rising on my ukulele, actually have conversations with people who were ready to just sit still and silent in the audience, and get way more potential readers interested in the novel than I would’ve previously imagined possible. Everybody’s been to book signings of first-time writers. How many of us have been to fun ones?

#5 Make sure you remember your promises! Book signings have, so far, been a rare occasion for me to actually talk to readers, since feedback has been slow so far (and mostly came from friends and family members, yikes). Thanks to that, I’ve had a few good ideas and fun requests thrown at me – and I’ve had to not only accept them (can’t really help it – sometimes I’m a people pleaser), but make certain I’ve followed them to the letter while writing the second novel of the series (c’mon, it’s a paranormal romance – of course it had to be a series!). Because, one day, somebody is going to find me and ask me what happened to their idea? Did I really include the hunter brothers by the name of Čargonja in the second book? (I did, ahhhh.) And did I have fun while doing so?

#6 Always bring spare copies of the book. Sometimes you’ll bring most of them back home – sometimes you’ll run out of copies in the middle of the event! Which one’s scarier?

Now onto Novel #2, just have to get a few pesky things out of the way first – like Thomas Hamilton and lunch. 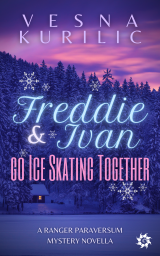