Hooked On The Hood in 5 Easy Steps

Please note: Teeny tiny spoilers for Arrow (through 2×13) available throughout the article. Also, I claim no ownership on any of the photos and/or names mentioned. Linking fest mostly delivers YouTube and IMDB entries.

Arrow has been one of the biggest surprises tv has offered me in the past year or two, and I can’t help the feeling it fared not nearly as well among my geeky friends. True, it’s a show based on a comic book, and another try at a “modern day vigilante” they try to sell us every couple of years. I wouldn’t be the first to give up after a certain period. But, coincidentally, some of the things that Arrow brought really hit home, at least with me. So, in hope I spread some light on the few basic things I happen to like about the show, here’s a few suggestions where to start with Arrow – when you pick up the first episode, of course. (I don’t really see the point of joining in on a show later in its life. I imagine it must be even harder than usual to connect with the characters when you try to connect the dots of episodes past.)

Step #1 Appreciate the pathos of… well, everything!

When I first started watching the show (in the very early days), I immediately got hitched on the emoness of everything, but most of all on the idea of coming back to a family which doesn’t know you or need you. There were many things which bothered me at the start (most of all Laurel), but the gravity of Oliver’s situation – I know, sounds like a joke when it’s about a comic book vigilante – really got to me. Not to mention the island sequences. Later I realized that there are many show with the dual now-then structure, but Arrow was first of the kind to me. And it works. Later, when you start caring for the characters… it works even better. This is one of the few tv shows that ever saw me crying – blame Tommy Merlyn’s season one finale – and all of it in a show based on a regular mass-produced comic book. Interesting indeed.

Step #2 Observe as the female characters get increasingly more badass.

I never cared much for Laurel – something about her just… I guess we didn’t click – but even I have to acknowledge her self-destructing phase. Maybe she didn’t truly become a character until season two, but still, currently she’s awesome. Moira was never anything other than badass. Thea has her moments – and runs a club on her own as a teenager. But Sara… I guess some types of characters just fit me better. And then there was Nyssa… Oh, Nyssa.

Step #3 Get acquainted with two of the best sidekicks tv has offered so far.

By the time everyone started swooning over Mr. Renfield of JRM’s Dracula, all I could think was – guys, have you never met DIG? Sure, his sidestory is quite irregural (or, as at the moment, nonexistant), but he’s one of the finest specimens of humane humans I’ve ever seen in a tv show. He serves his sidekicky role well enough, but he is also incredibly believable when he tries to force Oliver to realize his own humanity. Dig’s incredibly easy to love.

And then there’s Felicity. Not only is she one of the most feminine geeky sidekicks I’ve ever ran across, but she’s also incredibly intelligent and, at the same time, adorable as hell – and not in the “cute puppy teenager” style seen too often in tv shows. I can honestly say I’d love to dress as her (yup. busted.) and at the same time I’d recommend her as a possible role model to any science-loving female teen. In a show full of knives and bullets and arrows, too, she may very well be the only one rocking it on her intellect alone. Kudos, Ms. Smoak.

(You know you can even wear the exact same stuff Felicity wears? Scary.)

Step #4 Enjoy many familiar actors again on the screen.

Dr. Moon, River Song and Jack Harkness in the same show all over again? A geek girl’s dream come true. Also, we have Agent Lincoln Lee (missed him!) in a role crazier than anything you could imagine, both River (still unsure about her mental state) and dr. Tam (definitely crazy). There’s Helo and Tory from Galactica, The Kanima of Teen Wolf (surprisingly not crazy, although still very teen), Original Ruby (unfortunately, she was better in Supernatural – nope, nothing can really make me love Laurel, not even the booze), Mina Murray (actually… her part was aired before Dracula came out – but I still didn’t recongize her as Mina – you know, the mask and all), and, most of all, Spartacus’ Crixus… well, honestly, to me he’ll always be Slade. (And yes, I DID NOT KNOW the shit I signed up for by loving the character – never read the comic. It still hurts.)

I’m sure there’s many more I don’t even know, but there’s also a few awesome actors who were completely new to me – starting with Stephen Amell. (I know, I, too, still think of Kahlan Amnell every time I read his name.) I wouldn’t list him as a top anything, but I sure as hell buy his leading performance. 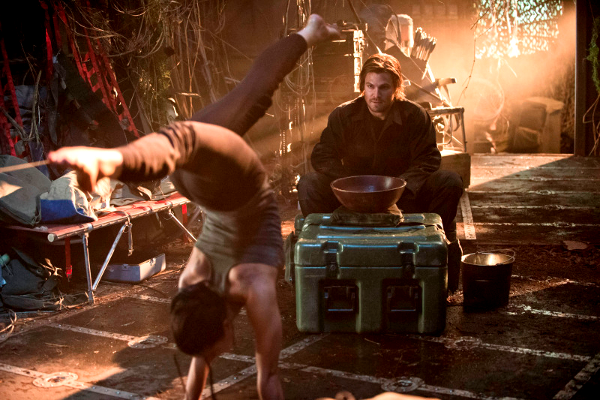 I must admit it was one of the first things I loved about the show. I grew up on 80s and 90s action flicks, and I still can’t get enough of modern face-to-face fights and beautifully coreographed action sequences. With this show, the action is in everything, and although some of the scenes were basically hilarious (not all actors can pull off things as Ming-Na Wen), it’s still one of the most beautifully physical shows currently available. Also, arrows. Everywhere. (Especially here – after Katniss’ practice sequence, best archery scene I’ve seen so far, I think – yup, even better than Teen Wolf’s Allison Argent.)

It’s also one of the reasons it won’t appeal to everyone – but not a single one show can claim to do that.

P. S. Ships on the show deserve a separate post. Or, when I think of it, let someone else do the talking – at least for my second-favourite ship.